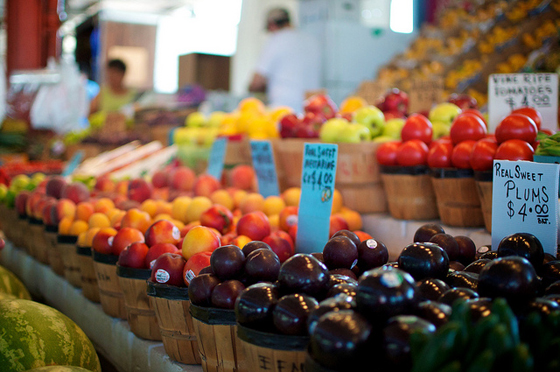 Friends, I have been feeling a bit…saturated these days. After some soul searching and some experimentation, I have decided to try out eating fully vegan for 30 days.

I have dabbled with vegetarianism, and during my days when I worked at a farmers’ market, I didn’t even so much as look at meat. I didn’t miss it. I didn’t crave beef burgers or chicken wings, and I felt really good: slim, clear headed. Because the vendors at the farmers’ market had a trade deal agreement, I’d trade the cheese I was selling for bunches of organic greens, peppers, squash…even veggies that I couldn’t identify (!). It was SO much fun to come home with my bounty and look up unique recipes online.

My overall feeling of healthiness has been waning this past year. I’ve gained some “happiness” weight with my fiancé, I’m tired a lot, and I don’t have the resolve to say “no” like I used to. (Cupcakes have been happening…too much.) I’m getting married in less than four months, and aside from just losing a few pounds, I want to feel more vibrant. I want to bounce off the walls with energy. I want to simplify my diet. No more flip flopping. I need to make a change. Also, as I enter into my marriage, I want to start establishing habits that are good for both me and my soon-to-be husband. I’m going to be 30 this year, and while I don’t know if a fully vegan lifestyle is for me for all the years to come, I want to try it in effort to see the difference it makes in my existence overall. It’s a step in the right direction, at least. If anything, I will learn new recipes and will hopefully feel a little better by following a regimen that omits dairy and meat. Choices will be easier knowing what I can’t have.

SO: I am calling on myself to take a one month vegan challenge. Thirty days of vegan eating that is inspired and deliberate. I will chronicle my experience on Unsullied: the next post will be about my favorite new vegan recipes and then I will follow up with my results of the challenge! We will see how a dairy-eating, salami-loving gal like myself does trying to make a healthy, plant-based change.

I have been following Oh She Glows and also read Eat to Live by Dr. Joel Fuhrman to educate myself on eating a more plant-based lifestyle. I’m taking the elements of Dr. Fuhrman’s book that ring true to me, and pieces of wisdom from my friend Veronica, a five-year vegan, for advice. Veronica inspires me with her consistently good food decisions and her resolve to stay the path of a healthy, plant-based lifestyle. I asked Veronica to share some insight on her decision to go vegan, and to answer some questions I had about staying with it. She was very honest and helpful!

First off, I asked her about the hardest part of her transition to eating vegan.

“The hardest thing to adjust to actually had nothing to do with eating. When I went vegan, I found that while it was pretty easy for me to get used to the new diet, it was hard for people in my life to accept the change.”

Sounds like we have that in common! Veronica doesn’t have a problem with it though, she takes it in stride.

“There’s a stereotype that all vegans are preachy and have a superiority complex. They interpret veganism as severity of character. Food is cultural and personal, something we cherish and share. So when someone rejects a “normal” diet, and goes so far as to deem a whole lot of its foods as problematic, people get defensive and lash out against a perceived threat. We can all get along despite our differences! I just don’t need to hear, ‘but bacon is delicious’ for the millionth time.”

When I asked Veronica about finding new and fun things to eat (instead of just salad, salad, salad) she told me, “The easiest thing was finding variety. My original hesitation was that my meal choices would be limited, but in reality… going vegan opened a new door for me. I started looking at new recipes and restaurants. I learned to cook.”

I already cook, but I’m already having fun looking up new recipes on how to make zucchini noodles and vegan pad thai!

Veronica told me some of the advantages she has seen in her life since switching over to the vegan lifestyle.

“I’m slimmer. My skin’s nicer. I feel lighter and have more energy. I think my immune system is better, though that may be a coincidence (at least, I don’t get sick as much as I used to). But I also think that I really benefit from cutting out so many processed foods. Being vegan sets certain ‘dining out’ limitations in stone. There aren’t options for me at places like McDonald’s, Burger King, Dairy Queen, etc. As a result I eat a lot less fast food. It’s still easy to make bad choices (Taco Bell is vegan-friendly, need I say more?), but overall it’s been a much healthier route for me. Also, call me crazy, but I think I smell better than I used to.”

That’s all for now- but stay tuned for some awesome recipes next… I’m trying out some super savory and fun eats- more to come!

I have been on this trend for three days now, and so far, aside from missing scrambled eggs a bit, I’m not really having a hard time! Yesterday I had toast and peanut butter for breakfast, a green smoothie for lunch, beet juice as a snack, lots of teas like yerba mate, and lentils with arugula, caramelized onion and quinoa for dinner. I had apple and pineapple throughout the day as well.

I will have some follow up blogs with more insights from Veronica, links to recipes, tips, and some of my results, too: how I feel, what I like/ don’t like about my 30-day vegan stint!

Are you vegan or have you dabbled in eating vegan meals? Any tips for this newbie?